When you know you’re a person on your own with a unique set of needs, goals, dreams and obstacles, then what is the biggest act of violence against the self ? What steals the joy of living ?

Judging a fish by its ability to climb a tree. Thinking that another’s success is the measure of your failure. Someone’s happiness is he lack of bliss in your life.

We all have an innate tendency to compare ourselves with others without thinking about its repercussions on our self-esteem. Why can’t we be like a flower which just blooms without comparing itself to the next flower ?

A dog which is limping as one of its legs is hurt never says ‘why is the dog lying happily across the street not suffering like me ? How dare it have all its four legs uninjured ? A zebra never sees its stripes and wishes to have spots like a leopard. Every living being except human takes pride in itself and is contented with the way nature has created it.

Humans endowed with the sixth sense look at everything on this earth in terms of comparison. If a thing isn’t worth comparing, nobody wants to possess it. People want expensive things so that they can tell their next door neighbour that they are posh and rich.

Have you seen anyone competing for growing plants at home ? Hardly anyone thinks ‘Oh she has such a beautiful money-plant growing in her balcony, let me also cultivate a home-garden in my vestibule.’

That itself tells you that comparison itself is a shallow concept and doesn’t benefit anyone. Comparison is inevitable in a world where we are constantly bombarded by advertisements and the way media embodies perfection. We aspire to be like someone who is better looking than us and more confident than us.

Someone who is successful yet maintains a coherent balance between professional and personal life seems to be the epitome of perfection to a normal person who is working hard to make his ends meet. 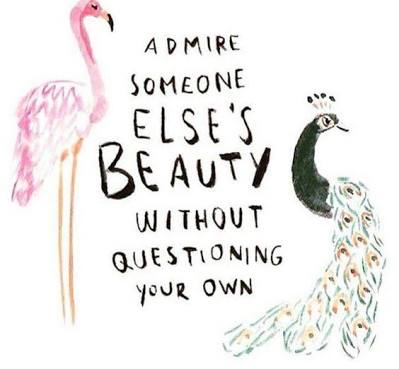 We all bring with us our own destiny and everyone’s journey is different. If I want to be a famous tennis player like Maria Sharapova, but I don’t like tennis, then the whole basis of comparison in itself is a foolish thing.

We tend to compare with others just for sake especially when it comes to fame, beauty and money. We have a feeling that whatever the other person has got is the best anyone can get. When you’re already biased against yourself, comparing yourself to others can only produce an even low self-worth. Most of the times, when you compare it’s mainly to put yourself down. You gain a weird kind of pleasure by telling yourself, “Hey look she is more beautiful than me and hence she is popular.” Your ugly sense of worth is restored. Congrats !

You just love to feel bad about yourself and wallow in self-pity by constantly placing yourself against someone else with a totally different personality. You can’t compare apples with oranges. But still you do and end up feeling miserable.
When you start comparing yourself and make it a dominant mode of functioning in the society, that’s when the real problem arises. Comparison as such for noble causes isn’t a bad thing.

If your comparison standards help you make a better person or enhance your already existing virtues, then it’s good you look upto others and learn from them.

What happens when you compare ?

You either feel superior or inferior when you see yourself with respect to others. It never serves a useful purpose.
Either way your sense of worth is dependent on others’ happiness and what they have in life that you don’t. Sometimes you don’t realise the meaning of being happy with what you have.

There is a story of a crooked tree in a forest which keeps cribbing that it doesn’t look tall and straight like the other trees. Once a woodcutter comes and chops all trees except the crooked tree as it’s out of shape and not erect like the rest.

Then the crooked tree realises how lucky it is and has been spared because of the same reason it pitied itself.
Beware of judging yourself based on the standards another person has set for himself based on what he has developed over years of trial and error.

Just because you didn’t end up where you intended to be doesn’t mean you look at where another person is in his life. Insecurity can bring out your worst side.

What you dislike about yourself many a time could be a boon in disguise..

One thought on “Comparison – a frivolous habit”